Hours before Hong Kong's largest pro-democracy newspaper, Apple Daily, announced Wednesday it would cease operations once and for all, dozens of its journalists arrived at the printing plant early Thursday morning to observe the last edition roll off the press.

Emily, who joined the paper in 2019, said she had been on the front lines of the 2019 pro-democracy protests that shook Hong Kong for months and led to a crackdown from Beijing on the semi-autonomous city's civil liberties.

"Seeing everyone wearing a reporter's vest, I felt that we were comrades in arms, living and dying together," she said about covering the protest movement.

Last week, Hong Kong police raided the offices of Apple Daily and arrested editors and executives over alleged breaches of a national security law, which was handed down by Beijing last year to ensure "stability" in the wake of the protest movement.

Since then, the law has been used to crack down on the pro-democracy movement by criminalizing large gatherings and curbing speech criticizing Hong Kong's Beijing-backed legislature.

However, the raid on the newspaper on suspicion of "collusion with a foreign country" is the first time a large media outlet in Hong Kong has been directly targeted under the national security law.

Emily told DW she felt sad and angry that Apple Daily was forced to shut down after the police froze the company's assets under the law.

"It feels like someone is trying to break off a relationship with me and I know that I'm still very much in love with the person," she said.

Emily said many media companies and other industries have blacklisted Apple Daily and journalists who used to work there could have a hard time trying to find new jobs.

Apple Daily founder Jimmy Lai has been in detention since late last year on various charges under the national security law. 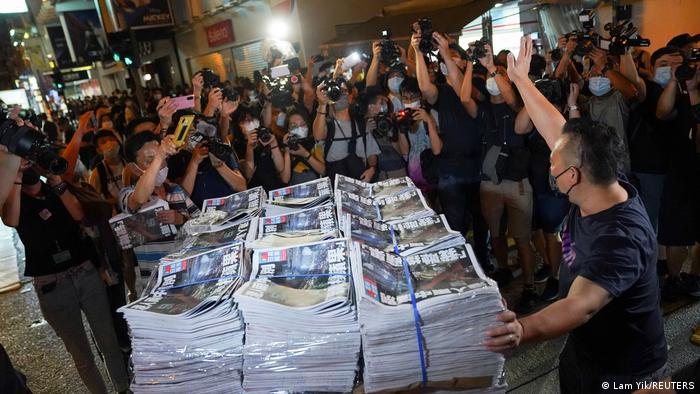 The last edition of 'Apple Daily' sold out quickly

Anson, a journalist at Apple Daily, said he had not been concerned about the rumors at the time. "I always thought it was totally impossible," he said. "We are doing the right thing, so how can they mess with us?"

When Anson heard that 500 police officers were raiding the newsroom on June 17, he rushed to the office and witnessed what he said was the most unforgettable scene in his 20 years as a journalist.

"It was a group of armed men who do not deserve any respect as they are willing to follow the orders of the government and raid the newsroom," he told DW. "As a journalist, I was witnessing it, but I couldn't do anything about it."

During the raid, police took away computers and hard drives and arrested five executives. Among those arrested were Cheung Kim-hung, CEO of the newspaper's parent company Next Digital, and the paper's editor-in-chief, Ryan Law.

They were charged with "colluding with foreign forces to endanger national security."

Another Apple Daily journalist named Lu told DW that the arrests and paper's demise have left him feeling "helpless."

"The loss of freedom of the press is just another sign of losing freedom of speech," he said.

"I tell myself that Apple Daily's mission is to expose social injustice and the decadence of the rich and powerful," he said. "This forced closure is the best evidence to reveal the current situation in Hong Kong."

Lu said that while he is anxious about losing his job, what worries him more is the possible domino effect of the government's crackdown on the city's media community.

"I don't know what will happen to Hong Kong after losing Apple Daily," he said, adding that authorities might target the free English-language daily The Standard or other media outlets next.

"I don't know what will happen to Hong Kong if we don't have credible media anymore," he said.

On June 22, Hong Kong Chief Executive Carrie Lam denied that last week's operation was a crackdown on press freedom, stressing that the authorities were not targeting "normal journalism," but rather entities suspected of "endangering national security."

Anson from Apple Daily said that many media organizations in Hong Kong have had to impose self-censorship since the security law came into effect last July. 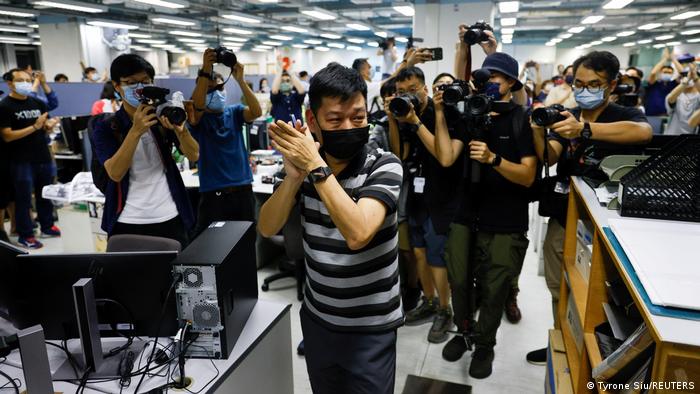 No such thing as 'partial' press freedom

Anson said press freedom is dead in Hong Kong, because being "partially free" is not enough. The veteran journalist added that he is worried that having worked at Apple Daily may result in him being targeted.

"If one day I am arrested, I will be very sad, very sorry, very uncomfortable, because I can't grow up with my son," he said.

"I just want to be a competent journalist, why do I have to suffer like this? We are doing the right thing, what are we afraid of? Why should we live in fear?"

Anson said he believes that the spirit of Apple Daily was to tell the truth, embrace justice and support democracy and freedom, and that its core values will not disappear even if the newspaper ceases to operate.

He stressed that when there is a lack of press freedom, there is even more demand for news and the role of journalists becomes more important.

"It is inevitable to feel powerless in Hong Kong now, and when you know it is inevitable, you will not be trapped by the feeling of powerlessness," he said. "There are still many things you can do."

Is the pro-democracy movement defeated?